The “Mouth of Truth” shown in the portico of the Basilic of S. Maria in Cosmedin in Rome is a large circular structure that illustrates a face with an open mouth. The name, resulting from the inspiration of the popular mass, connects the “mouth” to an ordalia (a divine penalty) that would bite who puts their hand inside.

The marble work, object of various theories of identification, has also been defined as the “antique well closure” the banal marble piece that portrays the face of a man or a divinity (the Ocean god, a faun, etc.) But now considering many historical and archeological aspects (symbology, religion, etc…) in agreement with the precious material, permit an accurate valid identity. 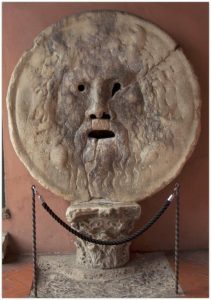 In fact, the work confirms the specific symbolic form that represents the solar form of the god Fauno, an Italian divinity, often confused with the Greek god Pan, both which had similar characteristics, as well as with the god Silvano, the Latin divinity of the game and forest.

Taking in consideration the links and the various religious origins of Rome and the Greeks, for the roman mythology Fauno was the child of Pico (father of Latino, descendent of Saturn) and of Canente (daughter of Giano). He became divine after he became king: god of the fields and the herds, also esteemed for all that was connected to the land.

God Fauno is attributed the gift of the divination and the procreative energy. Celebrations and propitiatory rituals were held for him near the Aventino. During the celebration, primarily held on December 5th, a goat was sacrificed with milk and wine offered. On the Palatino hill stood out the “lupercali” celebration dedicated to this god. During these rituals a mastiff and a goat were sacrificed giving the divinity the power to keep away the wolves from the herds, to produce a good harvest for the farmers, abundant game for the hunters and plenty of fish for the fisherman.

Considering his great oratory quality, he was everpresent in the propitiatory rituals and in the “baccanali” of other important gods of the land (Bacco, Giano, Diana, Saturno, Marte and others). Fauno was present especially during the celebrations of the divine protector of agriculture and the harvest: Cerere and Conso. The temple of these is found near Circo Massimo, a place where they celebrated the “consualia” on August 27th to sanctify the grain harvest and on December 15th to invoke the protection of the fields. From April 12th to the 19th, one of the superior latin divinities, Cerere, was dedicated three big celebrations of the grain and agriculture (cerealie) that were held from his temple going all around the area to Circo Massimo.

These celebrations were extremely spectacular and popular with songs, sacrifices and rituals consisting of big bonfires of grain from the preceding year as an act of good luck so that the sun in the months to come matures the harvest and crops in the fields.

In the temple of Cerere (IV sec. A.C.) you find the antique Basilic of S. Maria in Cosmedin. What remains of the structure and its columns is visible inside the area that belongs to the Basilic, together with the strong wall works of the Ara maxima of Ercole (VIII sec. A.C.), Latin god, not similar from the Greek Eracle but with its own character of the god of the land and the abundance of sun, the agricultural products and the words kept. In the Lazio legend he is connected to King Evandro and all the mythological aspects of god Fauno.

In the portico of the unusual pagan and christian architectural complex is safeguarded the “Mouth of Truth”, the original artistic and arcane work, that yet today unanimously instills an unusual appeal and pagan sensation, maybe due to the centuries of continuous devotion. 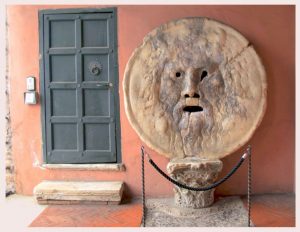 The big tile measures a thickness of 22 cm and a diameter of 166 cm with an overall weight of close to 13 tons. The cavities on the sides of the big marble disc, used for fastening purposes, identify the work as an opera vertical and central, hung on the bottom of the wall.

The round form symbolizes solar fortune for agriculture. Also symbolic is the scrotum illustrated spherically below, in parallel to the horns above representing bilateral gland of generating power  and the profile of the two headed wolf, without a doubt referring to the “lupercali”.

This image of the god Fauno, sculptured with cavities in the hard density marble is geologically a marble material on the surface, certainly manipulated overtime that preceded the extraction of the blocks below. Therefore, the volume, form, geologic aspect, and historical-technological of certain types of marble used in Rome, lead us to believe this work was realized before IV sec. A.C.

This work was probably brought by the romans to the temple of Cerere, connecting the three hills Palatino, Aventino and Capitolino, where Rome rose.

Legend tells of a young Roman nobleman, certain   of his wife’s infidelity, who asked her to profess her innocence and submit herself to judgment before the Bocca della Verità (The Mouth of Truth). Nevertheless, the adulterous woman succeeded in saving her hand with cunning. She made a plan with her lover asking him to present himself among the crowd the morning she was to undergo judgment; pretending to be insane, he embraced her before all the people.

Unperturbed, she approached the great mask and placing her hand in the mouth proudly declared: “I swear that no man has embraced me and kissed me except my husband and that insane young man.” Her hand remained intact and her husband was fully satisfied.

Legend has it that whoever swears falsely while keeping a hand inside the mouth will withdraw no hand at all the hand having been cut off. Most likely judgment was supplied by placing an official behind the mask with a well-sharpened sword. 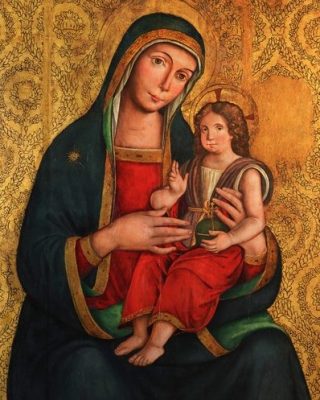 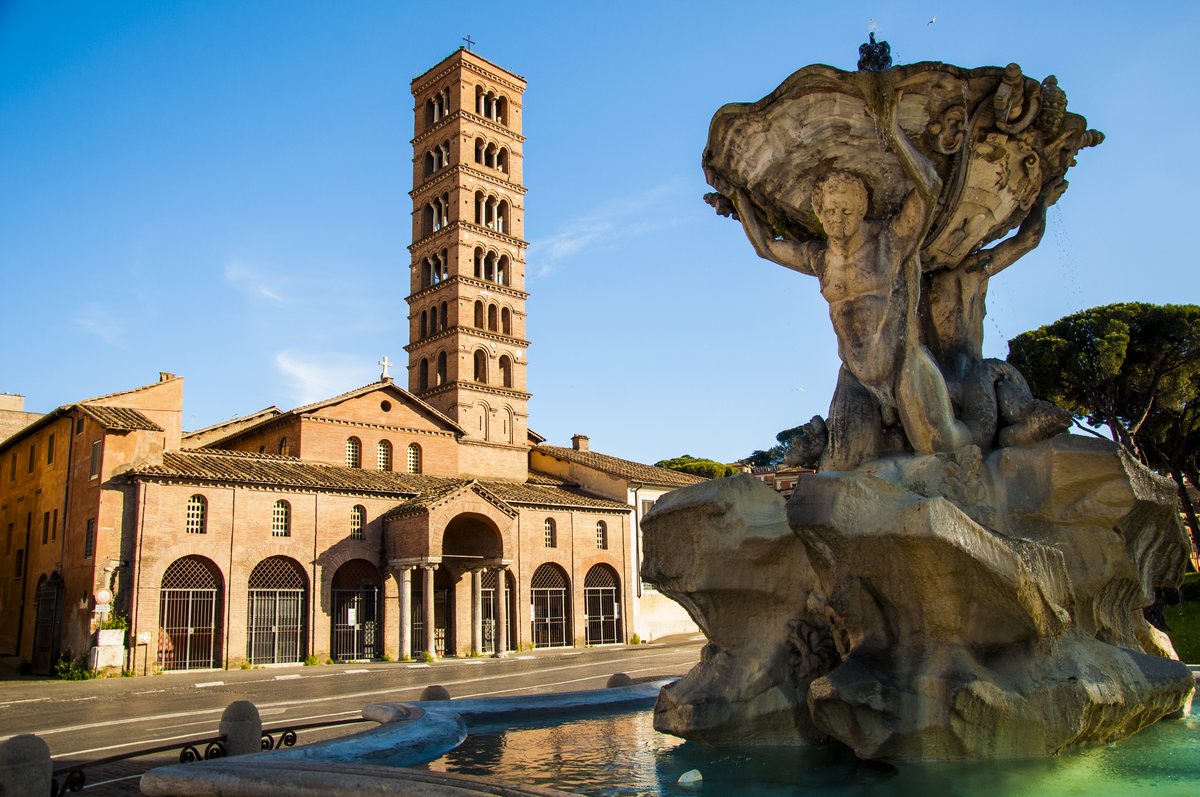